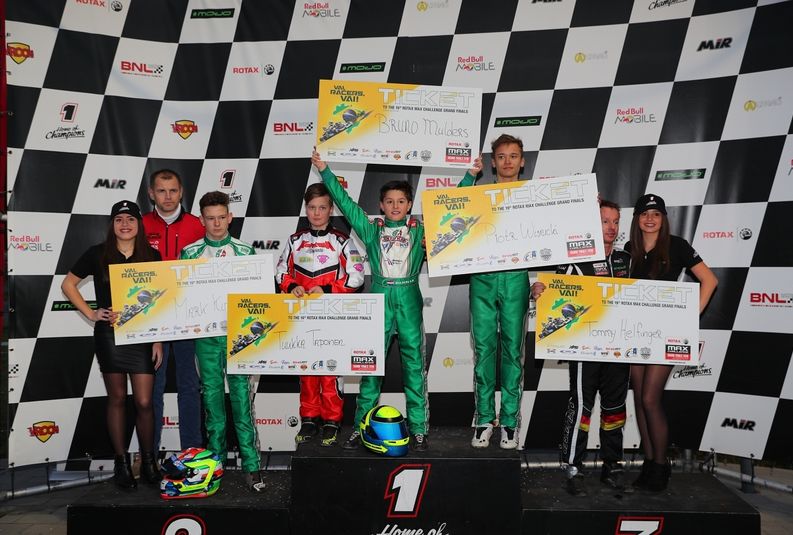 With just three weeks before the 2018 Rotax Max Challenge Grand Finals in Brazil, over 150 drivers in five different categories headed to the “Home of Champions,” Karting Genk, to take part in the second running of the BNL Rotax Golden Trophy.

Despite Europe heading into winter in early November, the initiative by the event organizers promoted a last chance opportunity, thanks to the welcome assistance of Rotax-BRP to award five final Golden Tickets to five lucky drivers.

Despite the planned night-time qualifying not going ahead, due to a power outage outside the circuit just ten minutes before it was scheduled, the event would still provide its fair share of drama and action over the fast-paced final day of competition.

Bruno Mulders (NED - Michiel Mulders) would be the first champion crowned in the event, as the #71 would eventually came out on top, having dominating the final, taking the win by 4.678 seconds after 11 laps.

Mulders was untouchable, as he took a hold of the lead early on and calmly kept extending his lead, whilst the likes of Enzo Bol (#55 - NED - Bol Maurice), Alexander Skjelten (#33 - LAT - Flandria Kart Baltics), Obst Maksymillian (#77 - POL - Bambini Racing) and Kasper Schormans (#40 - NED - Schormans Inge) were embroiled in a titanic battle over several laps.

Bol would eventually get the upper hand in the dying stages, after multiple position changes saw the youngster make it a Dutch 1-2, taking with it the runner-up prize of a full season entry into the 2019 BNL Karting Series season.

Skjelten, Maksymillian and Schormans completed the podium, with Dovydas Gudelevicius (#23 - LUT - Razas Motorsport) just 1.3 seconds off Schormans at the flag, having made a great resurgance through the field, after a non-start in the earlier Pre-Final.

A clash in the pre-final between Mitchell van Dijk (#7 - NED - Erwin van Dijk) and Tommie van der Struijs (#40 - NED - Martin van der Struijs) on the very first lap heading into turn one, saw the former end up on two wheels and spin off, giving the pair a lot of work to do in the final.

However, the Dutch pair managed to fight their way back up the order, with van der Struijs initially finishing 6th, being penalised post-race with a collision penalty, putting him down to 14th, whilst van Dijk charged through to 11th place at the finish.

Lewis Gilbert (#129 - GBR - KR Sport) was a driver on a mission to get some further practice time ahead of this year’s Grand Finals, and the Briton did not disappoint at the 1360 metre circuit, based in the Limburg region.

Being the stand-out driver was what he became during the weekend, especially when it came to the shorter qualifying practice sessions, putting in an impressive time to nearly break the 56-second barrier in the process, before winning the final by 2.986 seconds.

In the final, Gilbert would start pulling away from Van Vugt in the initial phases, even with both drivers not hanging around, getting valuable seat time ahead of the Grand Finals, with the battling behind the leading duo becoming more intense as the race progressed.

Gunichard would be the first big name to be eliminated from the race to get the Golden Ticket to Brazil, having received a five second penalty for using the run off area to overtake, before a clash later in the race saw the Briton decide to pit just three laps from the end.

Dodds and van Dijk came together in the battle for fifth, as the Briton would try a robust overtake on the inside on the Dutch driver at turn nine, but it ended in the pair collecting each other, with the #154 stricken across the front bumper of the #101. The pair would finish 30th and 24th respectively, but both Guinchard and Dodds were ultra-competitive during the build up to the finals in their own right.

Riis, who won the Rotax Austria Grand Festival back in August, completed what was a very barren podium at the trophy presentation in third place, ahead of Holland’s De Haan.

The Golden Ticket, however, would end up in the hands of Tuukka Taponen (#102 - FIN - Kohtala Sports), who overtook Jerzy Spinkewicz (#125 - POL - UNIQ Racing) on the 16th and final lap, with the pair being split by less than half a second at the chequered flag.

Senior Max - Kimber wins Battle of the Brits in Belgium, as Strawberry Racing floods the podium

The Senior Max category has always been one that is ultra-competitive, and at the Golden Trophy, this was no exception, especially during the last of the non-qualifying practice sessions having 45 Seniors split by just over nine tenths of a second around the 1360 metre circuit.

The event final, which was the last race to conclude the racing action, provided its fair share of great battles and clashes along the 17 lap duration, with quite a few of the drivers that have competed in the BNL Karting Series and Rotes Max Euro Trophy championships this season opting to head back to the “Home of Champions.”

As the sun set towards the end of the event, the ensuing fights out on track were mesmerising for both the crowds in the paddock and for the livestream viewers.

Morin, who was running the Sodi Kart chassis ahead of the Grand Finals, would show great consistency, but whilst battling with countryman Rasmus Fridell (#210 - SWE - Strawberry Racing), the pair would clash and be eliminated on lap nine on the penultimate corner, bringing to an end a good, solid weekend for the pair respectively.

On the last three laps, the Britons battled hard and fair, with Brown-Nutley putting a great move on Kimber on the penultimate lap to retake the lad, which had been fairly fought over, but Kimber would have none of it, even though the #202 was hell-bent on taking the Golden Ticket, getting a good run out of the final two corners on the last lap to try and outdraw Kimber.

However, the #228 would remain steadfast and keep the door to the lead firmly closed with the closest finish of the weekend, with Kimber winning by only 0.062 seconds ahead of the charging Brown-Nutley to secure his place for Brazil.

Pauwels, who made the move to Senior Max ahead of the weekend, will be representing Team Belgium in Brazil as a Junior, and definitely made an impression at Karting Genk this past weekend.

Daniel Machacek (#630 - AUT - DAEMS Racing Team) was a “tour de force’ at Karting Genk, having switched teams after a strong showing in the Rotax Max Euro Trophy campaign, which saw him take third overall over the four round schedule.

The Austrian put his TonyKart on pole position and won both the Pre-Final and Final ahead of the rest of the competition, not looking back behind him to win the event by 3.552 seconds after 17 laps.

Wisnicki, on the other hadn’t, was still showing good form, as was Göttler and German compatriot Pascal Drewing (#604 - GER - GKS Lemmes Power), but the latter would end up way down the order after the halfway point, finishing 24th.

Wisnicki would hold off Göttler for second at the finish by only 0.338 seconds, but the Polish driver kept calm and consistent, despite pressure from the German after taking second.  Coetzee would finish further adrift in fourth, 6.097 seconds in front of 2018 BNL Karting Series champion Xander Przybylak (#622 - BEL - Przybylak Jerry).

Jurmanowicz, Radne and Pullinger completed the top eight places, ahead of the top two DD2 Masters finishers in the field. Antti Ollikainen (#673 - FIN - JTL Racing) would secure his place in the 19th running of the Rotes Max Challenge Grand Finals after 17 laps, having overtaken Slawomir Muranski (#676 - POL - Wyrzykowski Motorsport), who had already secured his place for Brazil six weeks earlier at the Euro Trophy finale at Wackersdorf.

We would like to thank everyone that attended the 2018 BNL Rotax Golden Trophy, making it such a success, and we are looking forward to revealing the 2019 BNL Karting Series calendar in due course. Good luck to all those heading to Brazil in less than three weeks’ time!

Vorige Volgende
on Facebook on Google+ on LinkedIn
05
okt Blog

BNL Karting Series Round 2 review – Racing hard, whatever the weather!