BNL returns in style at the Kick-Off!

After 167 days since the last day of the 2020 season, the BNL Karting Series would return to action in its 14th season for the 2021 Kick-Off, which was hosted by Karting Genk: Home of Champions, the 1,360-metre circuit based in Belgium’s Limburg region, just over an hour away from Brussels.

After a lot of hard work behind the scenes by the organisation, the event was given the green light to go ahead, courtesy of the Belgian Ministry of Sport. However, despite the Kick-Off being classed under elite sporting status following much deliberation and discussion, both the Micro and Mini MAX classes were not allowed to compete.

This meant that almost 100 drivers from over 10 nations headed into battle over a full two-day programme, which saw four classes compete in qualifying practice, heats and finals. A total of 24 races saw plenty of action amidst pretty clear weather, apart from some overnight rainfall on the Saturday.

Latvia’s Tomass Stolcermanis was the driver to beat in Juniors with 27 racers putting their best foot forward, but the #213 capped off Saturday after not only taking pole position in the two groups during qualifying, but also won all three heats. The battling between him and Belgium’s Kaï Rillearts (#274), last year’s Euro Trophy champion, continued all the way through the weekend, with the pair swapping the lead during several races.

Rillearts was also in contention to win the Kick-Off, had a multi-kart incident between Enzo Bol, Olivier Jonckers, Lawrence Herbots and Edgars Vilcans off turns four and five on the first lap not brought out a full-course yellow that would be retracted with just seven and a half minutes to go.

Tommie Van Der Struijs, new signing at Kombikart Racing Team in the #254 entry, would take his first Junior podium of the year, having moved up two classes after the 2019 season, which saw him take the BNL Karting Series Micro Max crown. It also showed that the young Dutchman’s struggles in 2020 were not in vain, and his pace and prowess was rewarded.

Bruno Mulders (NED - #271) would end up battling away within the top three for the majority of the weekend but would edge out SP Motorsport’s Nick Gerhards to secure fourth by a mere 0.085 seconds at the finish line. The top ten were completed by Mikkel Pedersen, Joep Breedveld, Thomas Strauven, Farin Megger and Marius Rose. 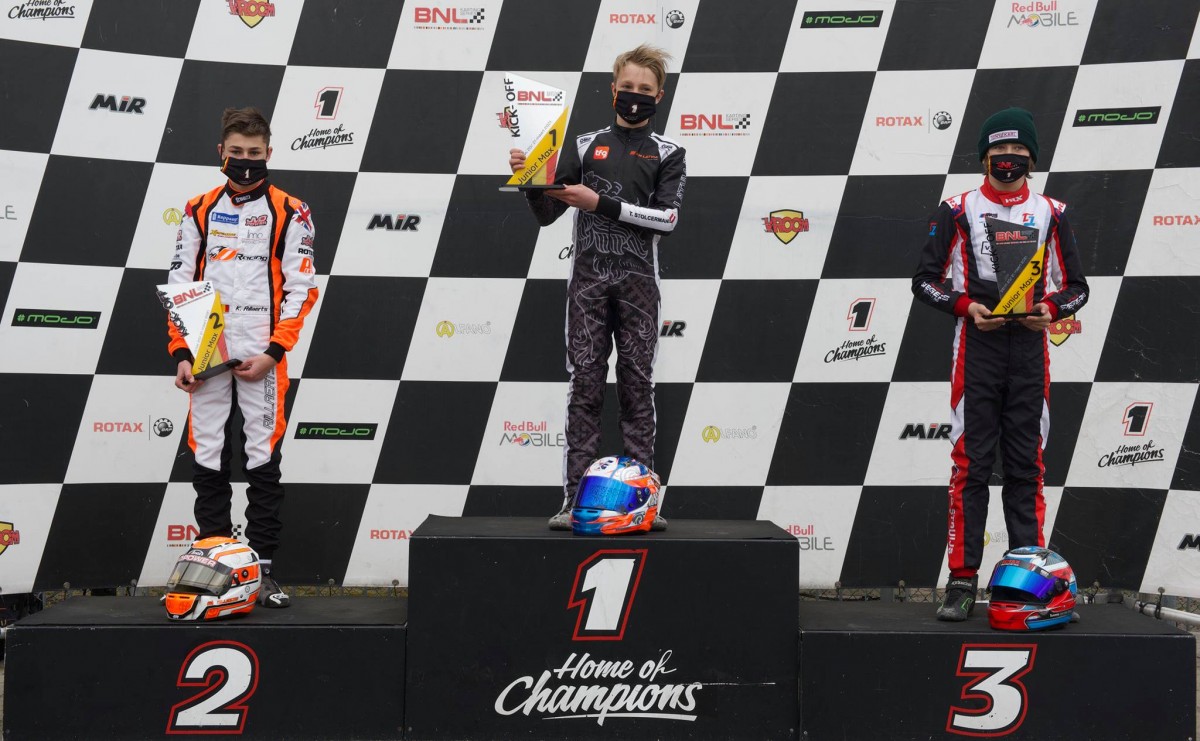 Denmark’s Mads Riis put on a dynamite display during Sunday’s proceedings, to become the winner of the 2021 Kick-Off in the Senior class, as the #379 from DAEMS Racing Team fought his way back after a difficult day in the heats, which saw him suffer two successive non-finishes early on.

The Dane, who will be heading to GT4 competition this season, could not resist the allure of karting again, as he secured a straightforward victory in the Second Chance heat on the Sunday morning, before scything his way through the field to secure a close-fought victory in the final by just 0.131 seconds.

Belgium’s Luca Leistra (#307) ended up as the vice-champion behind Riis, having initially led the intermediate classification, but he would stay within striking distance throughout proceedings before a last-moment mistake by SP Motorsport’s Juho Valtanen on the last turn of the final lap of the race weekend, gave him the welcome assist in taking second.

Belgium were also represented on the final step of the podium, courtesy of GKS Lemmens Power’s Lars Zaenen, as the #397 would cross the line just over a tenth of a second behind Leistra, whilst Valtanen would end up fourth ahead of 2019 BNL Karting Series champion Dylan Lahaye (#328 – Belgium). Lucas Schoenmakers (#396 – JJ Racing – Netherlands) would make an impressive début in Seniors, finishing in sixth, whilst Luca Thiel, Bennet Ahrens, Storm Broer and Jordy Van Der Eijk rounded off the top ten finishers in the exciting 16-lap finale.

KMD’s Paolo Besancenez was able to take a first win of the 2021 season, as the Frenchman used all of his experience to hold onto victory, after what had been a rather interesting weekend for the DD2 class. He would end up winning by only 0.054 seconds ahead of Finland’s Ville Viiliäinen (#422 – RS Competition), who had been in the mix all weekend long, and had even taken a victory in the second heat on Saturday.

Mick Nolten (#403 – GKS Lemmens Power), would get another season off to a great start, as the Dutchman also made it count when most needed, having ended up fifth following on from the heats on Saturday. But he would capitalize on dramas for both former two-time BNL champion Xander Przybylak (#402 – SP Motorsport) and defending champion Glenn Van Parijs (#401 – Bouvin Power) during the weekend, to hit the final step of the podium.

Przybylak and Van Parijs would battle away for the victory in heat one on Saturday, with part of the exhaust flying off after drama in the final corner of the race, with a five-second time penalty for the former being rescinded giving him two out of three wins on the Saturday. However, Van Parijs would end up taking fourth at the chequered flag, ahead of his former team mate, who still has some learning to do regarding the Kart Republic chassis he now pilots.

Ricards Subeckis from Latvia would take sixth, ahead of the returning Sebastien Degrande, Aymeric Guerin, Hannes Borde and Imke Arts, with the latter being the remainder of the top ten to cross the finish line. 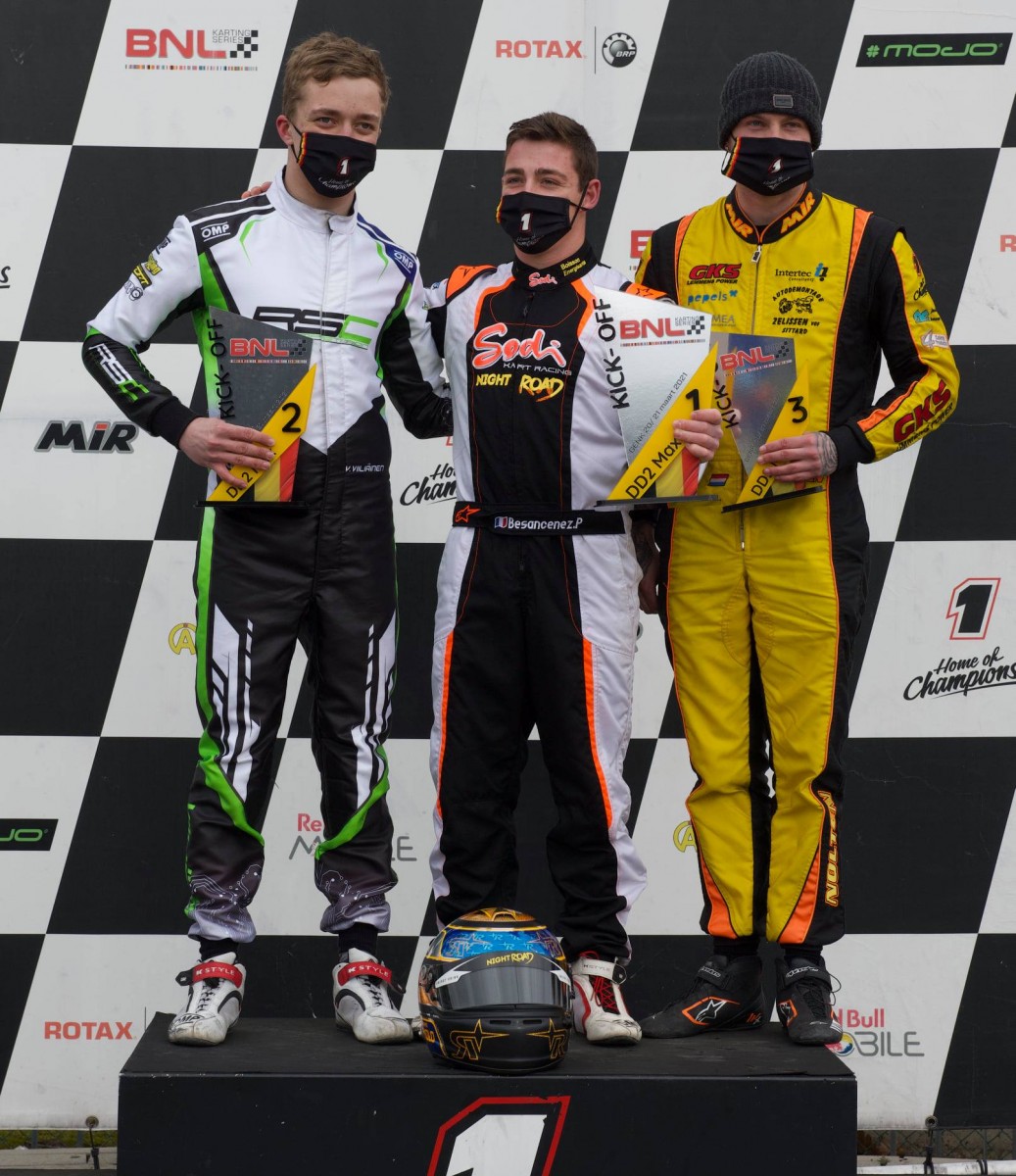 Despite having the lowest grid size of all four classes, the biggest drama happened right at the last dying moments of the race itself, as it had been a clear all-Belgian battle all weekend long between Carl Cleirbaut (#510 – KMD) and countryman Tom Desair (#530 – GKS Lemmens Power). But the latter would provide one of the most dramatic overtakes on the final lap at turn 12, as Desair would make the move up the inside to defend his title as Kick-Off champion from last year.

Cleirbaut, who was at the top of the intermediate classification after the heats on Saturday, would do his best to counter Desair’s move on the final corner of the final lap, but would have to settle for second by only 0.114 seconds at the chequered flag.

France’s Bruno Dos Santos completed the top three, and was only 0.563 seconds off the overall victory, having kept consistent pace during the final, whist Estonia’s Priit Sei (#501) and the returning Christophe Adams (#555) completed the top five. 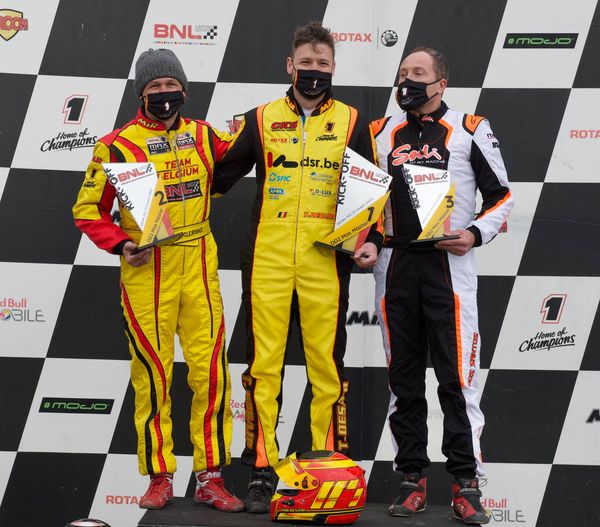 After a welcome return to racing, it was a glorious sight for BNL Karting Series organiser Dave Ritzen, who was able to enjoy the racing, after much hard work behind the scenes.

“Even though we were unfortunately unable to run Micro and Mini MAX this weekend, we were pleased to be able to go back racing, thanks to the Belgian Ministry of Sport’s assistance in allowing the event to proceed as planned,” he explained.

“New we are looking forward to the first round in just under two weeks’ time, with Junior and Senior Rotax already fully booked, which means that everyone is exciting about going full throttle in what could be a fantastic season for us!”

The first of three rounds for the BNL Karting Series takes place between April 3rd and 4th, which will see the very best of Rotax racers make their return to the Limburg region, with a lot of drivers making their return to another exciting season.